Perception is the process by which people select, organize and interpret sensory stimulus into meaningful information about their work environment. The knowledge is captured by interpreting the sensory input. Perception is more than sensory input supplied by sense organs and other receptors. It is the final product of raw and unprocessed sensations. 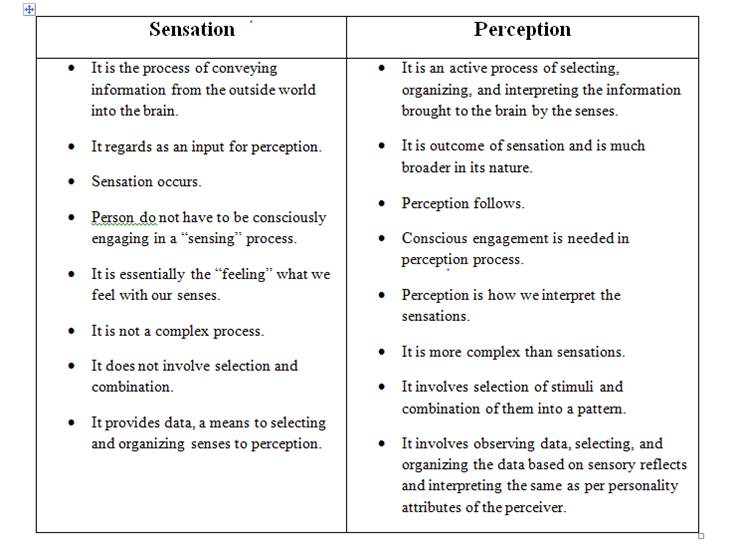 A Simple Model of the Perceptual Process:

The model has 3 variables: Input, Processes, and Output.

Input received is processed by this sub-process:

Our five senses are instantly bombarded with the varieties of inputs, so we cannot react instantly with those simultaneous stimuli or inputs. Therefore, there needs a process of filtering those bombarded simultaneous or instant stimuli, this process is called selection.

Why there is a selection process:

Because of the following reasons;

The significant portion is called the Figure, and the insignificant or meaningless portion in any perception is called Groud. According to Gestalt psychology, it is known as identifying an object(figure) from the background(ground). This principle solely depends on the observer but not the object or an item.

This principle is nothing but it only indicates that we only perceive the perceptions that are only relevant and attached to ourselves. We don’t care about those perceptions which are irrelevant to us.

The organization is the process by which we group selected information and finally perceive the perceptions from those stimuli. It means to figure out the objects, recognizable patterns, assembling the information which will give a meaningful whole information. The methods of organization are:

If there is no interpretation, perceived information would be meaningless. It is highly subjective and judgemental in nature. In real-life situations, interpretation is influenced by many factors or perceptual errors. This is called the final judgment of meaningful information.

The output of perception can be seen in the form of behaviors and emotions. They may be the feelings, attitudes, actions, etc.

Decision-making is an overall package of thinking, deciding, and action. And, it is affected by an individual’s perception. Every manager at all level of management are required to make a decision, and that depends upon the perception of those individual managers. So, we can conclude these two have an intense connection in the businesses. Example:

A perceived discrepancy between the current state of affairs and the desired state. Every decision problem requires selection, organization, and interpretation of information.

It is the selection of the best alternative. The final choice is influenced by the perception of the decision-maker.

You may also like Leadership || Motivation and Leadership || Organizational Behavior. If you liked our content HTML Editor, then Please don’t forget to connect with us through our social media sites. Facebook: Bcis Notes, Instagram: @bcisnotes, and Twitter:@bcisnotes.