Learning in OB is the acquisition of knowledge, skills and behavior through study or experience. Learning is a universal and continuous process not limited to any particular age, sex, race and culture etc. It is purposeful and goal oriented. It would be difficult to learn without any purpose. Learning in OB range from simple to complex.

Components of Learning in OB:

The theory of classical condition was postulated by Ivan Pavlov. Conditioning is the process of learning associations by linking of two events that occur together, usually between a stimulus and a response or between two stimuli. He developed the theory on the basis of the experiments on dog.

Ivan Pavlov (1927) in his studies fed meat power (UCS) to the dog while a bell (CS) was ringing. The meat power caused the dog to begin salivating (UCR).
The several presentations of CS followed by Us and strengthening of the behavior were termed as reinforcement by Pavlov. After several-reinforcement when the sound of the bell alone was presented, the dog salivated (CR). The classical conditioning phenomena had been established. 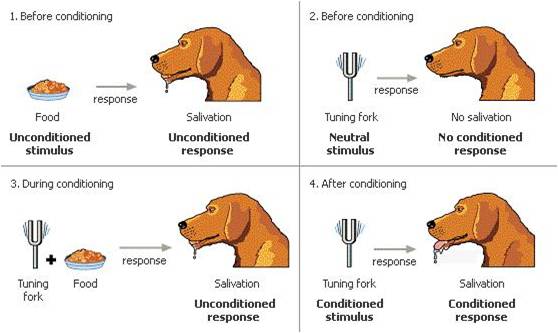 It is the training stage during which the animal is learning the stimulus-response relationship.

Spontaneous recovery refers to the sudden resurfacing of a conditioned response, which was previously extinguished due to a lack of association between a conditioned and unconditioned stimulus.

The process by which organisms learn to respond to certain stimuli but not to others.

Operant conditioning is the term derived from the word operate. When our behavior operates in the outside world, it produces some kind of effort for us and these effects determine whether we continue to engage in that behavior. It involves reinforcement for desired behavior as a central process in learning. If the consequences are rewarding, the response will be repeated and will grow in strength. This model attributes learning to response-stimulus.

It is also known as cognitive behavioral theories focus on both external environment condition and internal cognitive process in determining learning process. Learning is guided by cognitive process like intelligence , thinking, perceiving, and future expectation. It prioritizes that key to learning and changing is the individual’s cognition. Cognitive learning focuses on the role of perception and understanding play in a more complex form of learning. The psychological result of perception and learning and reasoning. S-R associations can only explain simple forms of learning and not complex forms of learning.

The theory was proposed by Albert Bandura. The basic concept of this theory is that human beings learn by merely observing or imitating the behaviors of others. Bandura believed that much of our learning comes from watching models like parents, teachers, peers, motion picture,s and television performance. Bandura criticized the behavioristic approach of learning by arguing that the experiments conducted in animals can not be generalized to human beings.