2. Confidence interval for the regression coefficient or slope (β1)

3. Confidence interval estimate for the mean of the dependent variable (y)

4. Prediction interval for an individual response of dependent variable (y) 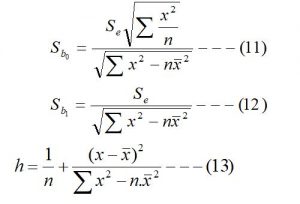 Se = Standard error of the estimate

tn-2, α= Tabulated value of the ‘t’ obtained from two-tailed student’s t-table at (n-2) degree of freedom and ‘µ’ level of significance.

n = Number of pairs of observations.

Other notations have their usual meanings.

Test of significance for the regression coefficient (β1):

Null hypothesis (H0­): β1 = 0 (This means there is no linear relationship between dependent and  independent variables)

Alternative hypothesis (H1): β1 != 0 (This means there is a significant linear relationship between dependent and independent variable.) (Two-tailed)

This test statistics follow t-distribution with (n-2) degree of freedom.

Sb1= Standard error of the regression coefficient (b1)

Other notations have their usual meanings.

An assumption on Regression Analysis:

The following three assumptions are necessary for the regression analysis. Which are described as,

The aptness of the fitted regression model is evaluated by plotting the residual on the vertical axis against the corresponding X values of the independent variable along the x-axis. If the fitted model is appropriate for the data then there will be no apparent pattern in this plot. However, if the fitted model is not appropriate then there will be a relationship between X values and the residual (e).
By plotting the histogram, box-and-whisker plot, stem-and-leaf display of the errors term, we can measure the normality of the errors.