Character Conversion From Upper to Lower

This is the very short and easy “C” coding that is used Character Conversion From Upper to Lower. “printf” is the name of one of the main C output functions, and stands for “print formatted”. 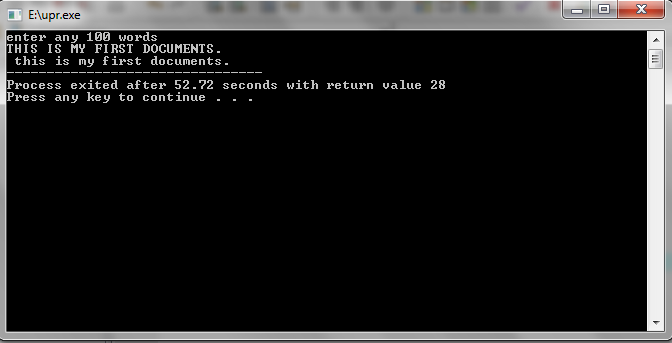 “;”
This is the very important part of any programming language because “;” helps to stop the program limits if you don’t write “;” in your program statement the programming will be wrong.

#include<stdio.h>
#include<stdio. h> is a statement that tells the compiler to insert the contents of stdio at that particular place.
stdio. h is the header file for standard input and output.

printf
In C programming language, printf() function is used to print the “character, string, float, integer, octal and hexadecimal values” onto the output screen. We use printf() function with a %d format specifier to display the value of an integer variable.

void main()
The return type of the function “main” is void, i.e. it does not return anything to the OS. “void” means that you’re not allowed to pass any argument to the main.

{}
The symbols { }, used especially in mathematics and computer programs for showing that things written between them should be considered together.

In the C programming language, scanf is a function that reads formatted data from stdin (i.e, the standard input stream, which is usually the keyboard, unless redirected) and then writes the results into the arguments given.

you may also like Character Conversion From Lower Case